Comfort and ease of use 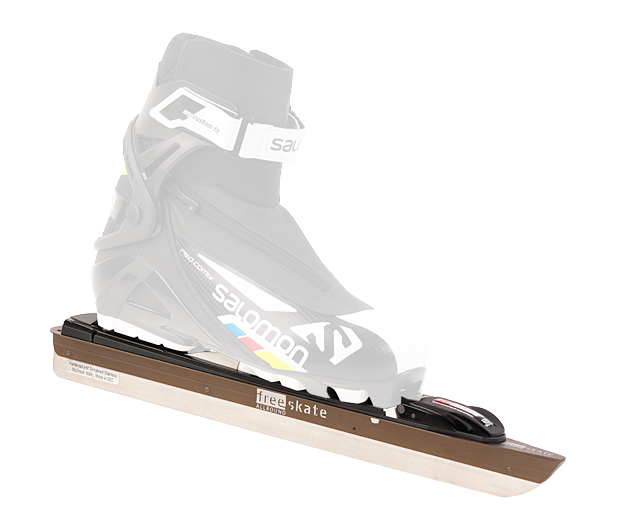 The free-skate is a comfortable option for skating on both artificial and natural ice.

These skates offer you the free-skating speed and comfort, on both natural ice and artificial ice rinks. 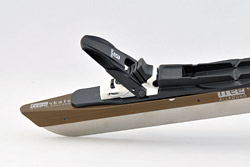 Since the introduction of the single axle Salomon Prolink binding, Free-skate also offers an opportunity for non-Salomon Pilot cross country skiers. No need for other ski boots! Just use your own NNN Madshus, Fisher, Alpina, Rossignol ski boots to skate with Free-skates.

As off fall 2014 all Free-skates have been issued withe a so called "Skate-plate" (for both Salomon Pilot and Prolink options). From extensive testing to improve our skates, we discovered that by incereasing the heel and toe pressure, the skating characteristics of Nordic skates could be improved dramatically.

The Skate-Plate not only has more heel lift, but also a small toe lift, than traditiobal nordicskates. The concave shape of the binding follows the boot more precise. This allows not only better steering of the skate, but also gives a better kick at the push off. This Free-skate innovation brings nordic skating to a higher level. Better skating and more fun on Free-skates

Actually it is remarkeble that this improvement shows up in a sport that has been prectised for ages. A sport or activity, in which not only in Holland but also elsewhere, local "inventors" have been trying to make better skates. Time and again already invented innovations have been forgotten, or where never truely accepted and forgotten.

Everybody can remember the invention of the "clap-skate". After years of scientific research and extensive testing in the 80s and 90s,  the clap skate appeared to allow skates to revolutianary improvements in speed and therefore world and personal records.

Remarkeble wheras it appeared to have been a patented desing form a German engineer, Karl Hannes, registered in 1894. A true "forgotten" invention.

Skates with a Skate-plate, or better; skates with a nose and heel lift, were already there a hondred years ago. In an era that almost every village had yheir own skate-makers, every skatemaker tried to make a "better" skate than others did. Also from these days  examples of "forgotten" innovations can be found. In these forgotten innovations several examples of skates with the same concave shape as Free-skate applies, can be found. So innovation: What else is new?

With 4 different skate models in 4 various lengths and 6 types of boots, there is an option for every skater at free-skate! Some of the great advantages of the free-skate:

Currently Free-skate sells its products exclusively through authorized dealers. Free-skates are a high quality and expensive product, the advisory role of the dealer is very important.